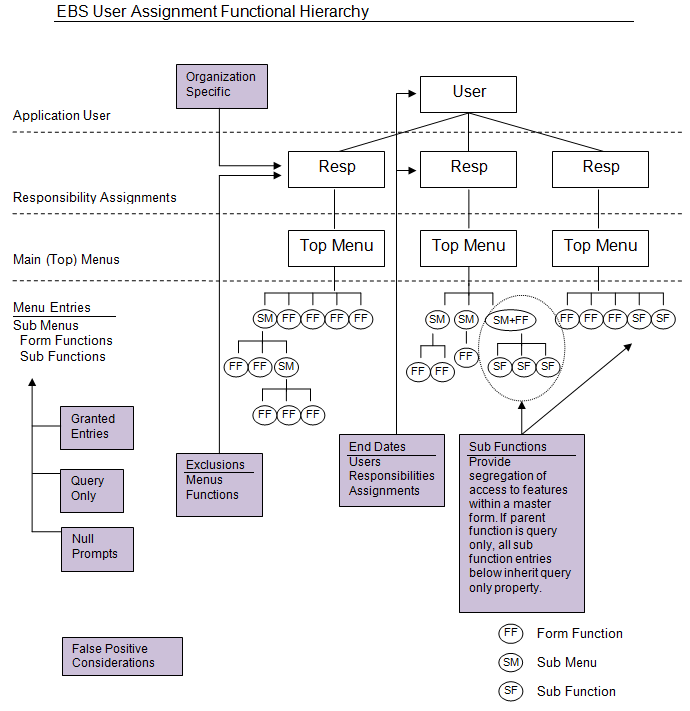 A customer and I just had a productive meeting regarding confusion over “accessible” menus and functions in Oracle E-Business Suite (EBS) and how Segregation of Duties Violations Manager (SoD VM) identifies accessibility with respect to function conflicts. Therefore, I thought it might be a good idea to share the issue and conclusion with all of you.

The customer found that the SoD VM violations report identified the “Master Items” function, designated as restricted in SoD VM, in their EBS instance as accessible to the user and thus reported such as an access violation. Yet, the customer, upon logging in to Oracle as the user and selecting the designated responsibility, could find no way to access the Master Items function. Thus, they contacted Absolute for an explanation.

The customer had defined the Master Items function as a “restricted” function in SoD VM, which indicated that any user with access to this function would be in violation of SoD policy.

The following menu path to the Master Items function was identified by SoD VM for the user in question:

However, the end user couldn’t access Master Items via their Responsibility. Why not?

*An interesting side note, although the “Item/ECO BOM” menu entry was flagged as “not granted”, it, and its components, are still accessible to the user as Oracle does not enforce the Grant Flag value for menu entries designated with only a sub menu. Only menu entries with a designated function name are impacted by the Grant Flag option.

So, does this mean there is a bug in SoD VM?

Having been developed to minimize false positive violations, SoD VM has reporting parameters that allow the user to exclude “null prompts” from report output, thereby eliminating any “false positives” relating to submenu entries without a defined prompt. However, this binary designation may again lead to “false negatives”, where violations are not properly identified, as there are several types of “null prompts”, some of which are accessible to the user while others are not. Therefore, SOD VM could and should better distinguish between the different types of null prompts.

A menu entry which is assigned either a submenu or a form function that has a null prompt and is not the child of an “AZN” menu is NOT ACCESSIBLE.

A menu entry which is assigned either a submenu or a form function that has a null prompt and is the child of an “AZN” menu is ACCESSIBLE as a part of an EBS “Process”.

Therefore, for now, customers can take advantage of the “Exclude Null Prompts” report parameter to avoid “Standard Null Prompt” false positives. Absolute will also look to enhance SoD VM to incorporate the different nuances of Null Prompts to reduce the possibility of false positives and negatives.

Share this ArticleLike this article? Email it to a friend!
Email sent!
MENU